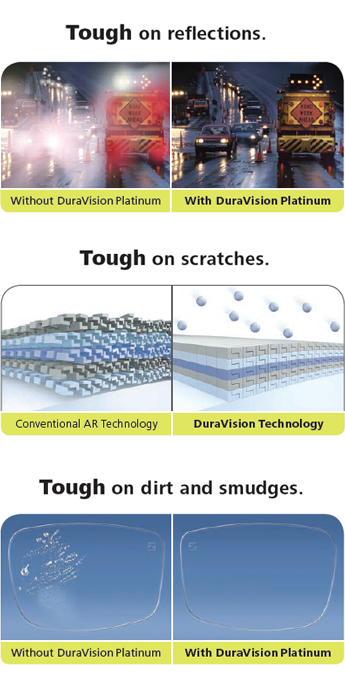 The moment your lenses survive even the toughest tests.

What does superior clarity mean in an eyeglass lens? How about the near elimination of distracting glare as well as scratches and smudges that interfere with your vision? Lenses that are easy to keep clear and clean, and are tough enough to last as long as your prescription?

Clarity in an anti-reflective (AR) lens is measured by the amount of light reflected from the lens surface. The fewer the reflections, the greater the clarity. This means your vision is sharper in high-glare conditions such as driving at night or working on your computer, and others can see your eyes more clearly.

ZEISS DuraVision Platinum reduces light reflections by over 20% compared to other anti-reflective lenses¹, giving you maximum clarity, day and night.

For a lens to be clear, it needs to be free of scratches. ZEISS DuraVision Platinum is three times tougher on scratches compared to conventional AR lenses, thanks to an integrated system of densely-packed coating layers on the lens surface. In laboratory testing with a dry cloth, DuraVision Platinum still looked new after 600 wipes while previous generations of AR showed significant scratching.

No matter how careful you are, your lenses will inevitably be exposed to dirt and smudges. That’s why ZEISS incorporates advanced technology to keep your lenses cleaner, longer.

The only thing clearer is no lens at all.